I’ve always wondered why it’s taken so long for duathlons to come to a land-locked city such as Beijing. I’ve met so many exceptional local runners and cyclists who’d do a tri if only they knew how to swim or had the confidence to swim in open water. Ironically, I found out about Powerman China‘s Beijing race from a local cyclist who DNF’d on the swim leg of the Sanfo tri. He persuaded the organisers to let him do the bike and run legs of the race but didn’t get a ranking. He hasn’t done another tri since then.

I forwarded the Powerman China registration link to my local cycling group in early March. The organisers were doing a Women’s Day promotion, giving women who registered on 8 March a steep discount on the registration fee and a necklace with a ‘PowerQueen’ pendant. One of the girls in the cycling group wanted to do it, and a group of us followed her lead. Most of the ladies registered for the short race (5km run-30km cycling-5km run), while three of us signed up for the classic distance (10km run-60km cycling-10km run). More members of our cycling club signed up when official registration opened for everyone later.

Organising a race or any event in Beijing is usually fraught with uncertainties and difficulties. This race had the misfortune of picking the same weekend as the Belt and Road Forum, when Beijing and its surrounding areas were on high security. The organisers informed us in late April that the race was postponed to the weekend after, which meant quite a few people had to pull out due to scheduling conflicts.

After falling off my bike on a descent in late April, the left side of my body had been so sore and bruised that I couldn’t do any training for about ten days. By the time the pain and aches completely subsided, it was already a week to race day. I decided I will just be content with finishing this race and not concern myself with my time.

Race weekend finally arrived. The Saturday when we had to pick up our race packs, attend the race briefing and rack our bikes was also the hottest day Beijing’s experienced in years. After a week of receiving confusing instructions about race pack pick-up and bike racking from the organiser, we were not pleased to find out that the race briefing and transition area (i.e. actual race venue) was situated 8 km away from where we picked up our race packs. Due to construction in the park, the most direct route was obstructed and we had to do a detour to get there. We missed the race briefing by the time we arrived, so we just racked our bikes and got on the shuttle to head back to town. We ended up meeting the two Aussie elites who were doing the race and had a good chinwag about Powerman Zofingen, the different between elite and pro athletes and their full-time jobs back in Brisbane (yes, I was over the moon when I found out they were from the same city as me).

Race day arrived. Classic distance athletes started at 9:30 am and the short distance athletes started at the ungodly hour of 12:30 pm. Thank God the weather had cooled down overnight, but the maximum temperature was still 31 degrees. I started too fast on the run, and heated up very quickly. I slowed right down to keep pace with B, but my heart rate remained in Zone 4 throughout.

I was looking forward to cycling as the weather warmed up. The cycling course was basically a flat 10-km loop that we had to do six times. In preparation for the heat, I’d filled up my bladder with water and froze it overnight, hoping that by the time I started cycling, the ice would’ve melted and I’d get to sip on cold water while having a cool ice pack on my back. As I’ve never been skilled at drinking out of the water bottle while riding, this turned out to be one of the best decisions I made. I was relaxed and well hydrated throughout the race and never had to slow down to pick up one of the water bottles from the supply station. 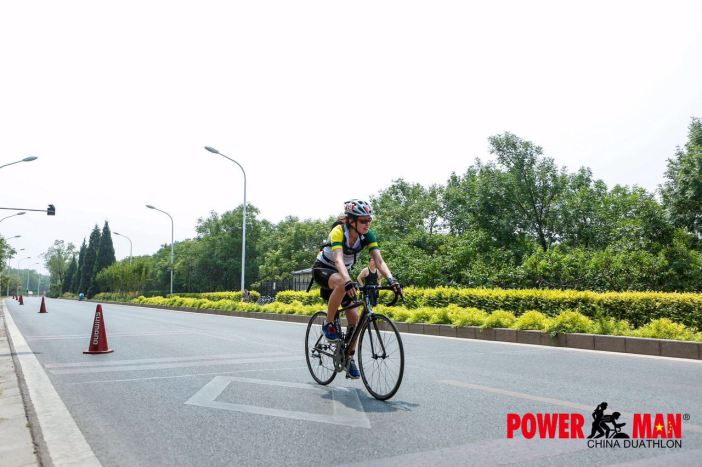 The last run leg was difficult as I had tummy discomfort for the first 2 km and had to take it very easy. When I got to the finish line, I was very pleased to see that I’d finished 4 minutes before my anticipated finish time of 4:30. When the results were eventually posted for both distances, I was happy to see that almost all my friends placed either overall or in their age groups. There was only an award ceremony for the elites, while the rest of us received prizes sponsored by Northwave and Garmin. I came in third in my age group (10th overall female) and received a pair of Northwave ‘Women on Wheels’ cycling gloves. This was the first time I’ve placed in any race, and I was glad I got a practical prize rather than a(nother) medal or plague.

I haven’t decided if I’ll do another duathlon in the future. Apparently all top three age-group placers will get priority entry and a discount on the registration fee for the Powerman Zofingen race. I guess I’ll decide when I receive the email from the organisers.