Most of April has passed me by in a blur, mostly with work travel, first to Hong Kong then to Washington DC. Incidentally the DC trip was on the weekend I’d registered to the Beijing Run. I was very disappointed that I couldn’t take part in the race as I’d been training for it. On top of that, I came down with a serious cold after getting back from Hong Kong and couldn’t speak for a couple of days before my flight to DC. The day before my flight, I was so sick I could only get out of bed to cough, take medication and drink water. I could barely swallow any food. It was a miracle how I managed to catch my flight the next day.

To say that week was the most miserable I’ve felt since breaking my arm would’ve been a gross understatement.

Purely by the grace of God, my throat miraculously healed on the flight, so much so that I could swallow the (disgusting) meals served on the plane. By the time I landed in DC, I’d regained some energy and people could actually hear what I said. I even felt well enough to sit through dinner at Morten’s The Steakhouse with my colleagues.

Despite sleeping at a relatively decent hour, I was wide awake by 5:30 am the next morning. I contemplated my options for whiling away the early morning hours without waking up my colleague, and decided I’ll go for a short run outside to check out the surroundings. 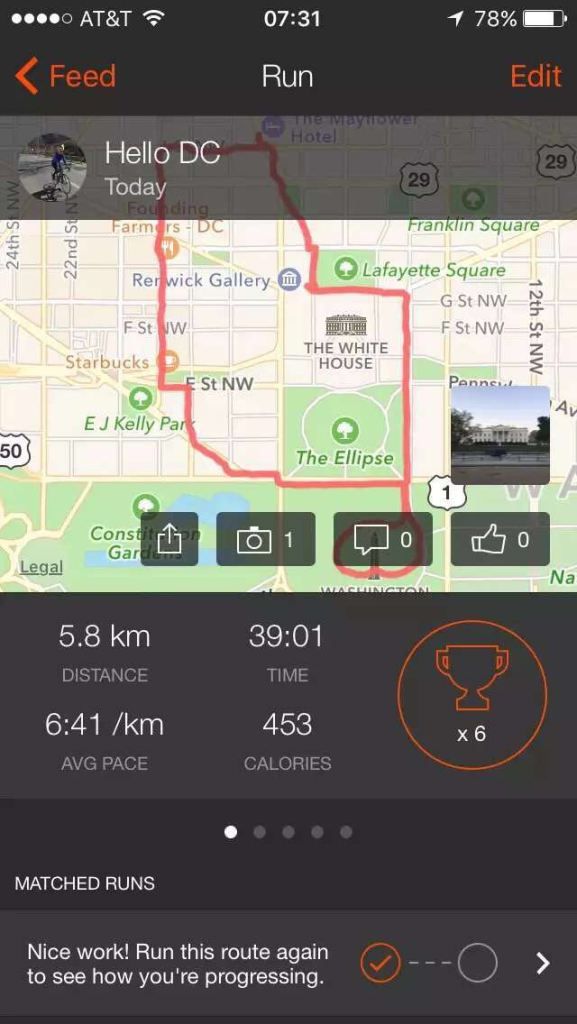 This being my second time in DC, I had some inkling of my bearings, having researched the hotel I was staying at and weather forecast for the weekend. It was so cold when I stepped outside of the hotel, I decided to start jogging immediately, instead of walking briskly, to warm up.

From my first trip to DC, I’d noticed there’s a real love for running in this city. So it didn’t surprise me to see other runners out and about on my run. Being a relatively new runner myself, seeing the locals running gave me the extra motivation to run on that very cold Saturday morning, even though I wasn’t feeling 100%.

Running in an unfamiliar city is always a little challenging for me. In DC, I stopped to look at signs, made detours when confronted with road blocks near the White House, and generally accepted whatever terrain I literally ran into. I enjoyed the sense of adventure, not knowing what I’d see as I turned a corner and getting a little lost and using the GPS on my phone to find my way back to the hotel. It wasn’t a particularly strenuous or long workout, but it was definitely memorable. There’s nothing quite like watching the sun rise behind the Lincoln Memorial and seeing the most famous capital city of the world slowly wake up on a beautiful spring morning.

I wasn’t sure if it was such a good idea to go jogging when I was still recovering from the cold but surprisingly I felt much better after the run. I’d tested the limits of my body and learnt that it was capable of much more than I thought was possible. It gave me the guts to cycle, swim and run after I got back to Beijing and was suffering from hayfever symptoms as a result of my allergic reaction to willow catkins. I had to take Zyrtec a couple of days just so I didn’t rub my nose raw but otherwise I’ve felt better each time after I rode, swam and ran.

Last night when I was doing laps in the pool, I began contemplating the reasons behind my recent addiction to exercise. My friends have been asking me how I maintain my motivation to exercise everyday. I realised apart from training towards the races I’ve signed up to do, I was just very grateful for every single day my body allows me to run, swim and ride, and I want to enjoy every bit of it while I can.

The secure transport of light